My personal G22, bought it through Lou’s Police Supply in Hialeah FL one week before the Gen 4s were publicly unveiled at SHOT Show.

O .40 S&W, you are being driven from your throne! Thou, from when you graced the world, the world has loved and hated thee. 10x22mm is your measurement. Both strong and true. Sadly many have insulted you as short and weak. You pack the punch needed. With the capacity wanted. Thou many claim to hate you. My love for you is true.

The .40 S&W released to the world on January 17, 1990; has since that day been credited as the Second Coming by some and hated as if it were the Anti-Christ by many. The haters claim that the cartridge is too snappy and has too much recoil yet at the same time make bold statements that it is short and weak. Though which is it? Too power or too weak? Come on now! Out with it!

The .40 S&W is neither. It is perfection. The cartridge replicates the most popular Old Western Cartridge of the era and not of Hollywood. The .38-40 Winchester; considered for its day an “all-around” cartridge. It was actually a heeled .40 Caliber projectile and was later attempted to be modernized by the great John M. Browning himself with the 9.8mm Colt cartridge in the 1911 for the Romanian Army contract at the turn of the 20th Century. Even further, the original design for the Hi-Power was to be a striker fired pistol chambered in a .40 caliber projectile replicating the 9.8mm Colt and the .38-40 Winchester. But Mr. Browning’s passing lead to the Hi-Power falling into the hands of Dieudonné Saive (designer of the modern Hi-Power, SAFN/FN-49, FN FAL).

Time marched on and folks toyed with the idea off and on until a gentleman form South Africa came to the United States. Mr. Paul Liebenberg; many know him for his work in S&W’s Performance Center and the excellent craftsmanship he has done. But when he first came to the US he started working for Pachmyar Gun Works. He worked on a side project known as the Centimeter Cartridge. It was to replace the .38 Super for IPSC and was also part of what Whit Collin’s went into making the .40 G&A. Collin’s wanted a replacement cartridge for IPSC when he worked on the .40 G&A with Col. Jeff Cooper.

Well, Mr. Liebenberg left Pachmayr and founded his own company; Pistol Dynamics. From there he made a friend; Tom Campbell. Campbell and Liebenberg worked on the Centimeter Cartridge and tried to get S&W interested in it. Which eventually happened. Then president of the company; Steve Melvin approached Liebenberg about converting a couple of their new 3rd Gen 5906s. Liebenberg obliged and the .40 S&W that we know today was born. 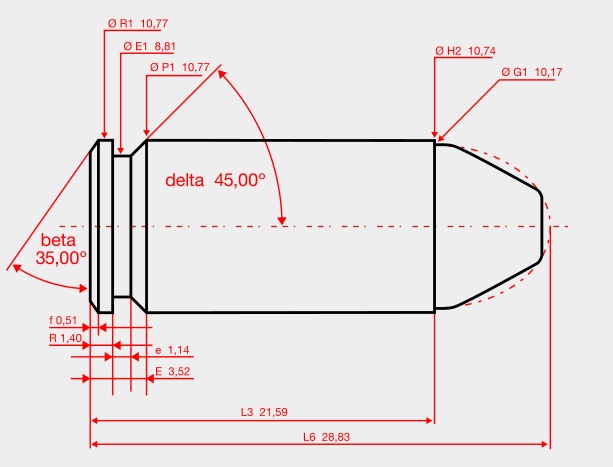 The energy of the .40 S&W exceeds standard-pressure .45 ACP loadings, generating between 350 foot-pounds and 500 foot-pounds of energy, depending on bullet weight. Both the .40 S&W and the 9mm operate at a 35,000 pounds per square inch SAAMI maximum, compared to a 21,000 pounds per square inch maximum for .45 ACP. The .40 S&W was originally loaded at subsonic velocity (around 980 ft/s (300 m/s)) with a 180gr bullet. Since its introduction to the shooting market, the cartridge has been on the market with various loads, the majority being either 155gr, 165gr or 180gr.

Right now everyone is flocking to 9mm, especially after the FBI ditched the .40 S&W. But what many don’t realize is that the .40 S&W is actually still a better cartridge since the new FBI load is a just a rehashed 147Gr Speer Gold Dot load and the super-hot 9mm loads that the internet claims beats .40 S&W far exceeds the pressure curve due to these being +P+ loads.

The .40 S&W still is the best due to three reasons.

And this is still all in a compact lightweight pistol that is smaller than any 10mm and .45 ACP chambered gun. The .40 S&W is still my personal choice when it comes to personal protection against two and four legged game. With my G22 I get 15+1 in a gun that weighs less loaded than an empty 1911. Follow up shots are easy and the pistol handles like an extension of my body. I compete in GSSF with my G22 and even bring out my G24 for bowling pin matches and hunting.

My personal G24 also doubles as my bump in the night gun for the home.

I have carried a Glock 22 as my primary duty gun in the majority of my LE career and it has never failed. The .40 S&W has and will do the job. The golden standard 180gr JHP from Winchester, Speer, Remington, Hornady, and Cor-Bon are all dependable.

The .40 S&W often touted as the armature’s cartridge. I believe it is the other way around. It is the cartridge of understanding person and the true believer of the “master of one gun” mindset. It does everything. You get compactness, capacity, power, and penetration all without the issues of excessive recoil, weight, and price. Folks always complain about the price of .40 S&W. Yet when I go, it costs the same as 9mm. Reloading it on a press is a breeze and it is really a very adaptable cartridge. I can have some powder puff plinkers and some real big game stoppers. I’ve actually used my G24 to hunt hog and deer and that’s with the factory 180gr Winchester Ranger SXT load. For protection from armored meat eaters like Florida’s numerous gators, crocs, and bath salt addicted zombies. The .40 S&W does the job too. A 200gr Hardcast Solid from Double Tap does the job against those pesky marine meat eaters.

The fad of folks jumping back to the 9mm is just that. A fad. Soon enough 9mm will once again be viewed as a useless weak cartridge and everyone will jump onto the .45 ACP or 10mm. In fact, that is already occurring and we see more and more resurgence with those two cartridges. But the .40 S&W just keeps chugging along. After a quarter century of service. This cartridge isn’t going anywhere. Sure, popularity might wane and the “cool” guys might be going to something else. But this dyed in the wool, tried and true devotee ain’t. I’m sticking with .40 S&W and I thank you for leaving me more options on store shelves when the panic buys come. While you’re all turning tricks on a street corner for a 50rd box of Remington UMC 9mm or .45 ACP. I can calmly walk into a Walmart and walk out with my .40 S&W.

Glock was the first company to have a commercial product chambered in .40 S&W on the market. They beat S&W to their own game. When the cartridge was unveiled at the 1990 SHOT Show, Glock reps were able to get a few samples and designed the Glock 22 and released it to the market before S&W had the 3rd Gen 4006 out. The first agency in the US to adopt the .40 S&W was not the California Highway Patrol (which many credit as doing so since they were the first to adopt the S&W 4006). It was the South Carolina Law Enforcement Division; otherwise known as SLED. You can look it up in the November 1990 Issue of Shooting Times.