The Colt 1991A1 Government Model 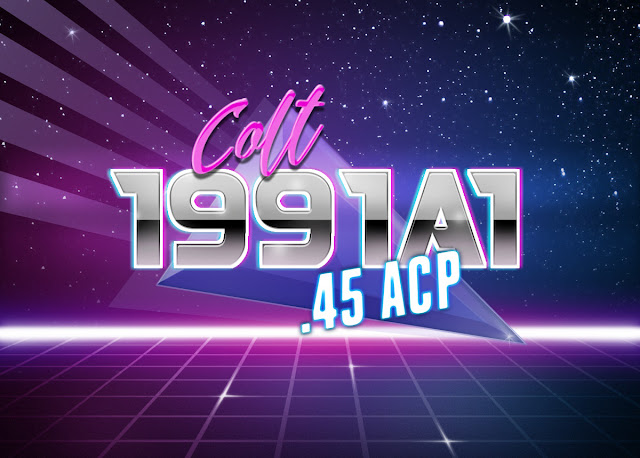 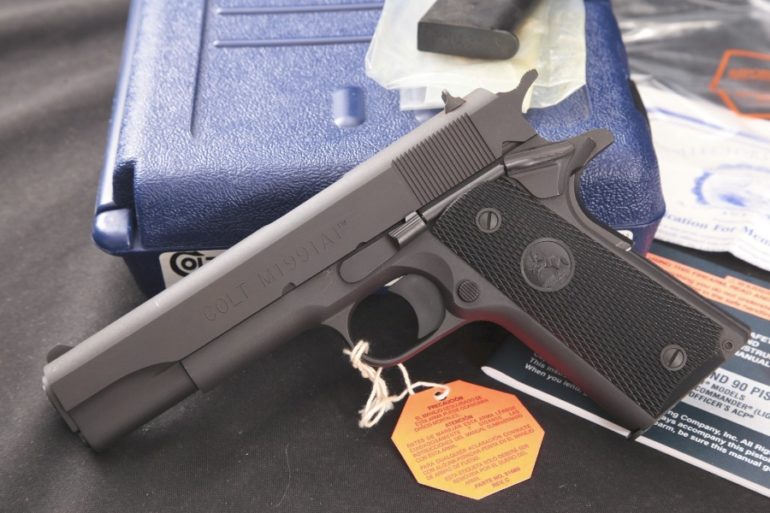 The 1980s were a rough time on Colt. Their once strong dominance in the handgun market was destroyed by the likes of Smith & Wesson, Beretta, and a relative newcomer, GLOCK. With the replacement of the 1911A1 in military service by the Beretta 92 Series, Colt lost a strong marketing tool. For generations, they marketed the 1911 series as being "America's Fighting Pistol". A handgun capable of taking the harshest punishments across the globe. Then the adoption of the Beretta as the M9 hurt them. So did the lack of quality that Colt was suffering from when the U.A.W. started a employee strike that lasted four years. As the New York Times reported 1986;

Since Jan. 24, 1,100 workers have been on strike at the factory here and at a newer and larger plant in West Hartford that makes commercial guns. The dispute, between Local 376 of the United Automobile Workers and the Colt Firearms division of Colt Industries Inc., is primarily over wages and fringe benefits, according to both sides. 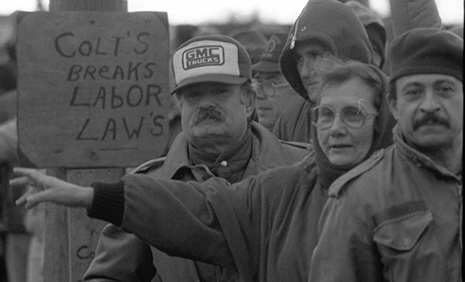 The company said it was continuing work at 70 percent of prestrike levels, with 600 permanent replacements for the strikers and 180 of the strikers who have returned to work. "We're going to go back to running our plants and trying to produce our products with the new people we have," the Colt vice president for personnel, Richard S. Reibeling, said.

Quality suffered, once common royal deep blue finishes and hand fitting of parts went the wayside as replacement workers came in. Entire run of guns were left to be finished by less skilled workers. As I recall, an entire batch of Colt Trooper MK IV Revolvers that were to be polished and blued were instead parkerized and sold as the Colt "Peacekeeper". 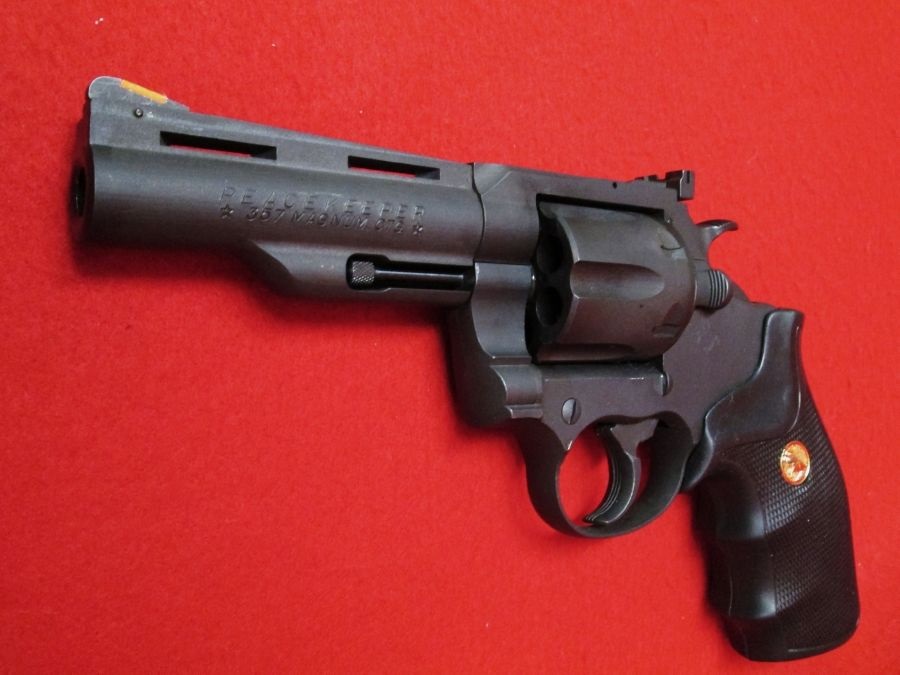 Additionally, with the lack of quality control came outside competition too. Norinco and Springfield Armory smelling blood in the water, jumped into the 1911 game and started to take away Colt's market-share. Norinco being a State Owned Company by the People's Republic of China, produced some very highly regarded 1911 pistols and had them sold for incredibly cheap prices. Springfield Armory, also started their long courtship with IMBEL of Brazil and started to have them make 1911s for them.

Norinco and Springfield Armory made 1911s.

Colt, seeing that they were being undercut in the market by cheaper imports and losing customers due to the lack of quality and still higher prices on their products versus their competitors' went to the drawing and marketing board. The first step was ending the strike and getting the skilled talent back. As reported by the New York Times in 1990;

The start of the 7 A.M. shift on Wednesday was delayed an hour while the jubilant workers, armed with banners proclaiming "We Beat 'Em and We Bought 'Em," celebrated their victory after four years on strike with a spirited rally outside Colt's gritty, brick factory building.

"It's like being home again," said 62-year-old William Smith, who maintained the gun-making machines for 22 years before he and 1,050 other members of United Auto Workers Local 376 walked off the job on Jan. 24, 1986, after 10 months without a contract. "I always took pride in the Colt product," he said. 'We all did. I was so damn happy to be hired here at Colt 22 years ago," Mr. Smith said. "I wanted to work here where they made the guns."

The second step was getting back to making guns that were affordable and reliable. Colt took the basic MK IV Series 80 Government Model 1911 and looked at what could be changed to lower manufacturing and production costs. 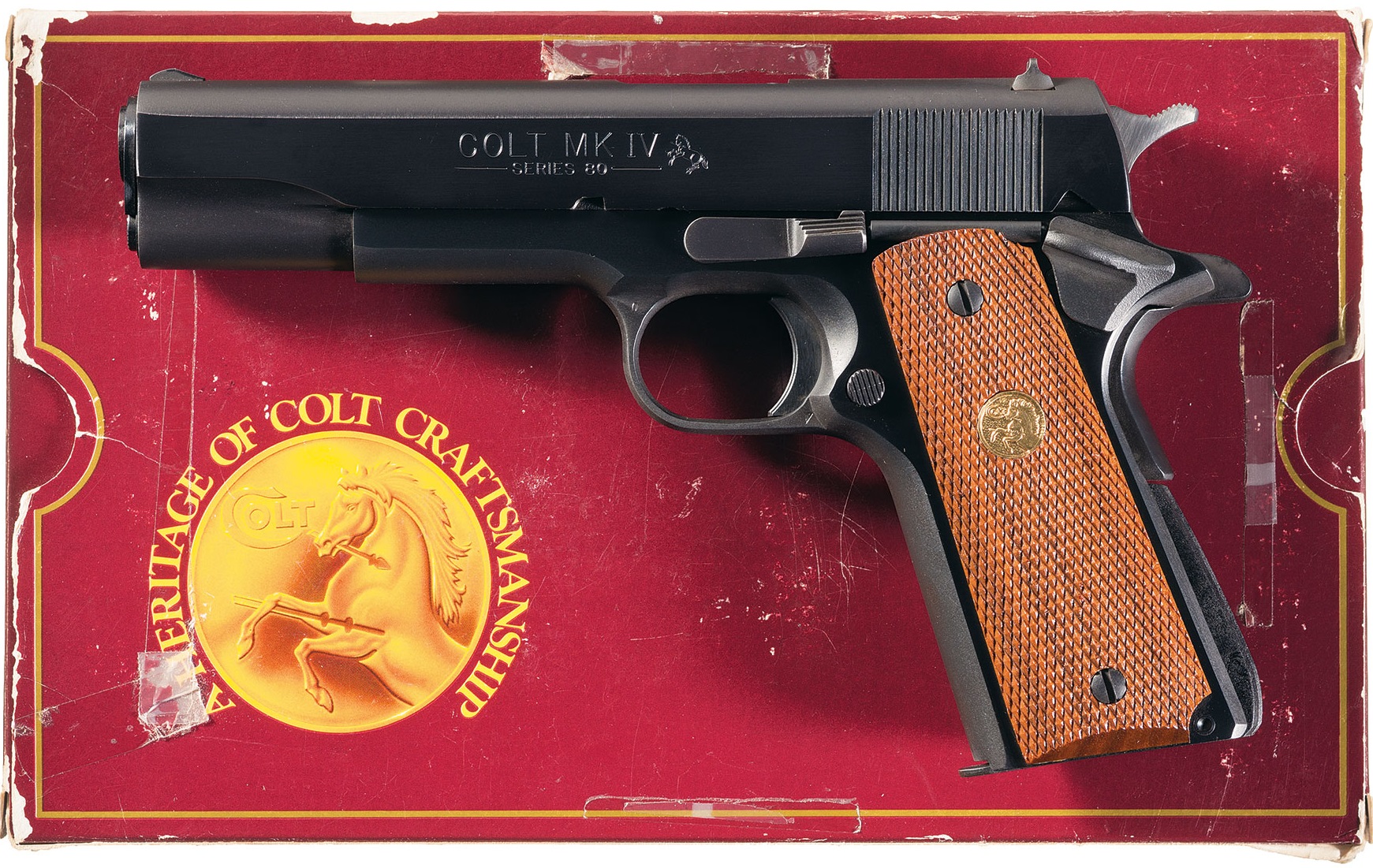 One of the things Colt learned form their competitors was that at the time, the no-nonsense military look was actually selling well. Both the Norinco and Springfield Armory made guns looked like WWII era USGI contract guns. Luckily for Colt, that meant less time finishing the guns. Instead of the polishing and blueing; a "no frills tough guy attitude" set of features was included. A matte parkerized finish was applied, black plastic grip instead of woods, a nylon mainspring housing and trigger pad instead of alloy, a set of plain black sights, and they shipped from the factory with two seven round magazines.

Lastly, with a bit of clever marketing, a simple "COLT M1991A1" slide rollmark and the serial number range picked up where the original USGI contract pistols left off in 1945. Colt even cashed in on the general mashing of teeth that former service members and gun aficionados had towatds towards the adoption of the 9mm and the Beretta as the new military service pistol and had it all ready for release by it's name sake, in 1991. 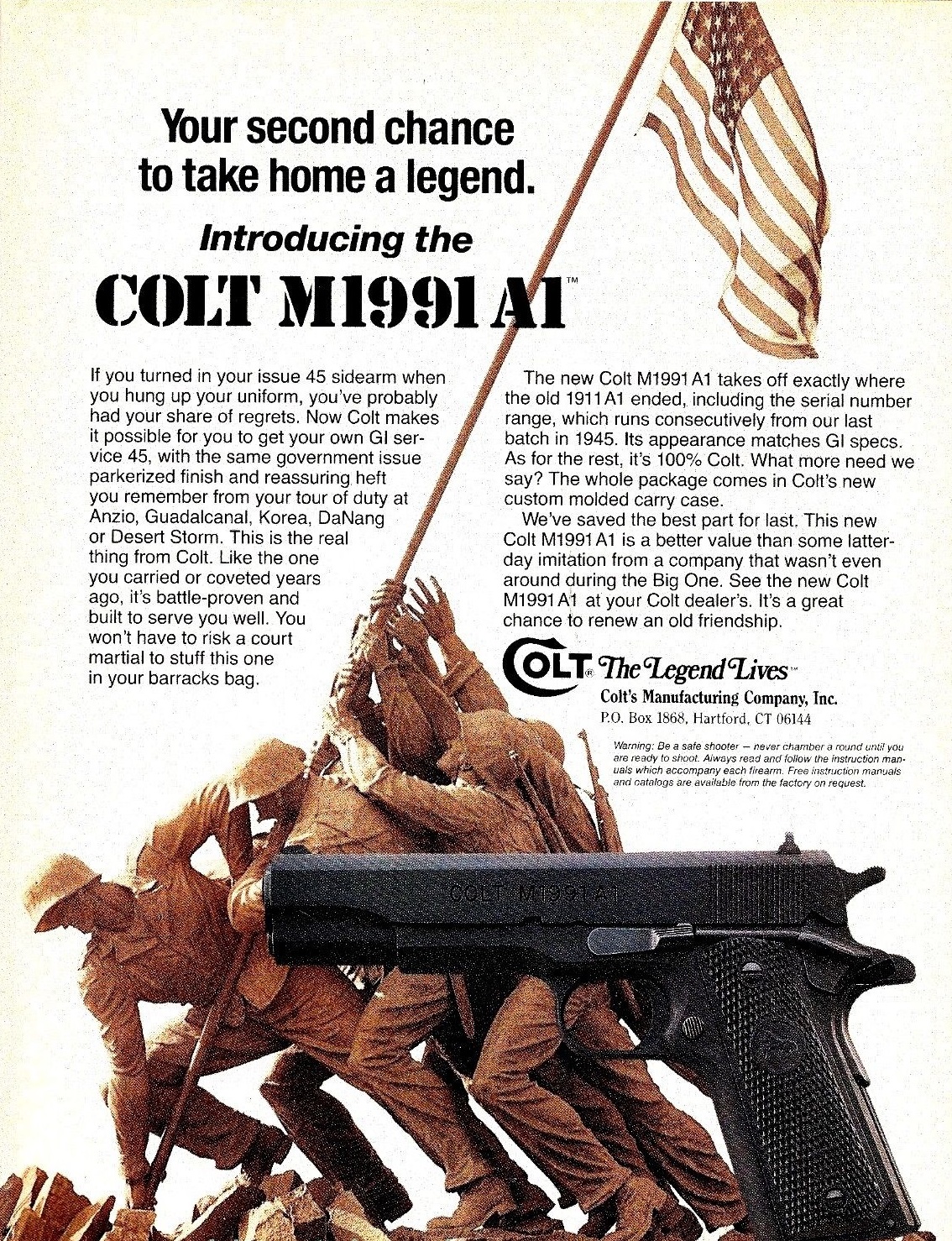 Their ad even threw in a jab at Springfield Armory since they weren't around for WWII.

The parkerized finished became a a semi-polished blue finish, the nylon trigger and black plastic grips became an alloy trigger and wood grips, and the gun was no longer called the M1991A1. After the change, it became known as the Series 80 Government Model, and as such the slide rollmark was changed too. Colt collectors refer to the older pistols as "Old Rollmark" (ORM) guns and the newer ones "New Rollmark" (NRM). The Model SKU itself is the same however, #O1991 for the blued model.

Left is a current production O9911 & on the right is a pre 2000 production gun with a upgraded trigger. 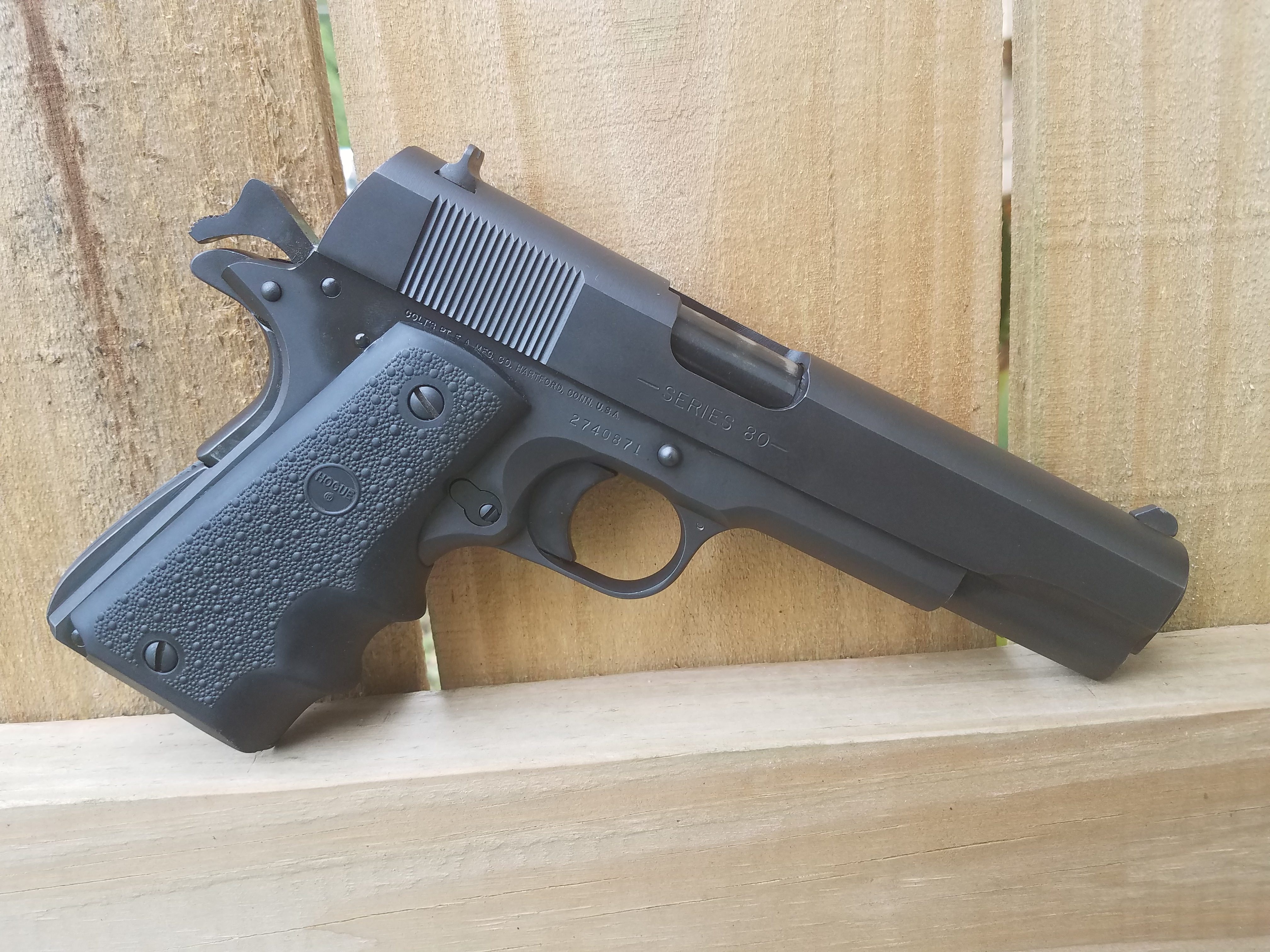 My personal Colt 1991A1 Series 80 was born in 1994 and has had a two slight changes since it left the factory. I swapped the OEM grips for a set of Hogues and the mainspring housing was changed from flat to arched. She also proudly wears the large billboard style old rollmark. Other than that, she's stock. 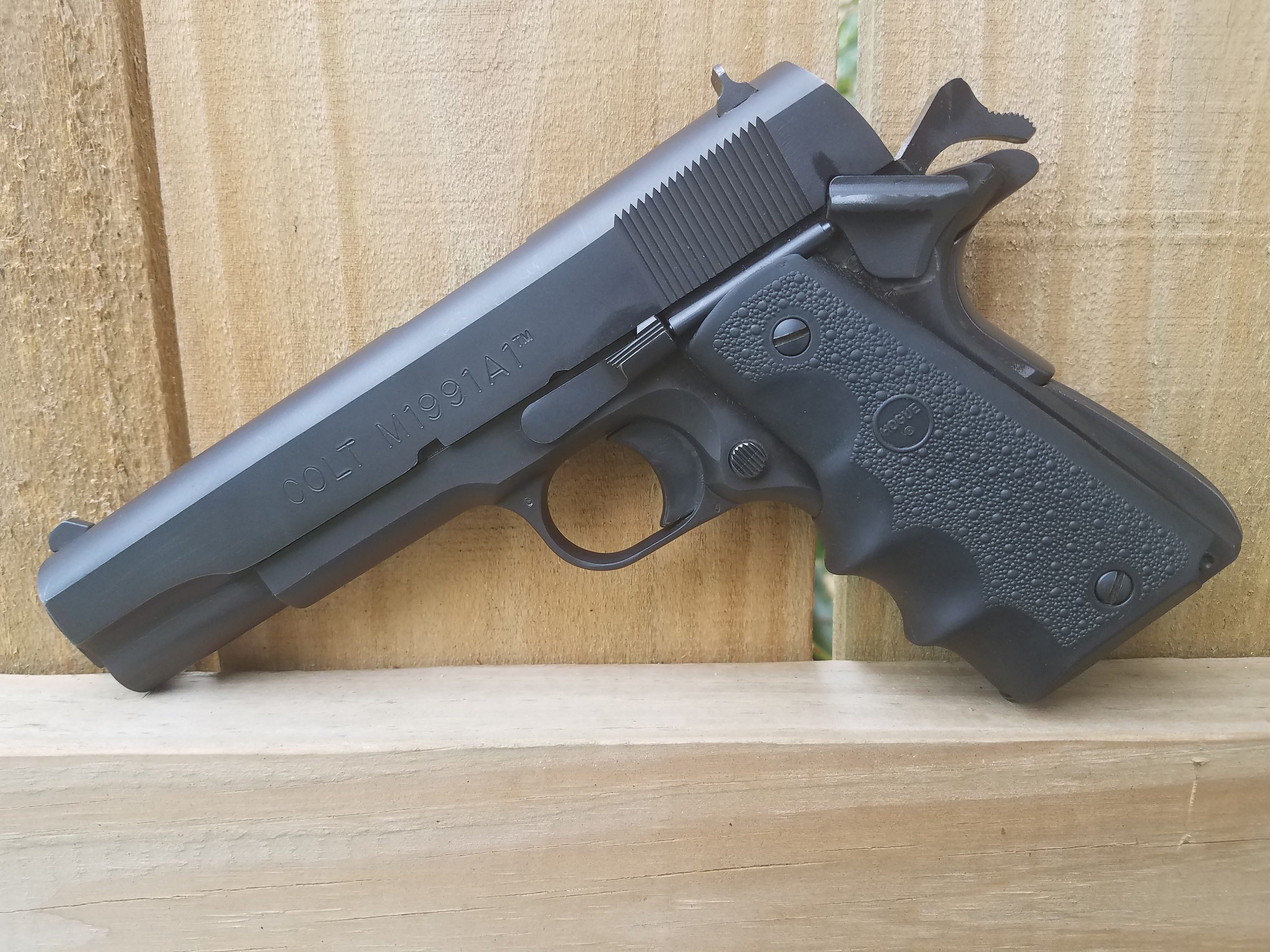 The 1991A1 came with the some upgrades as the standard MK IV Series 80 had and also got an additional one. A lowered ejection port, a beveled magazine well, and refinements to the feed-ramp and barrel-throat to provide for reliable use of hollowpoint ammunition. 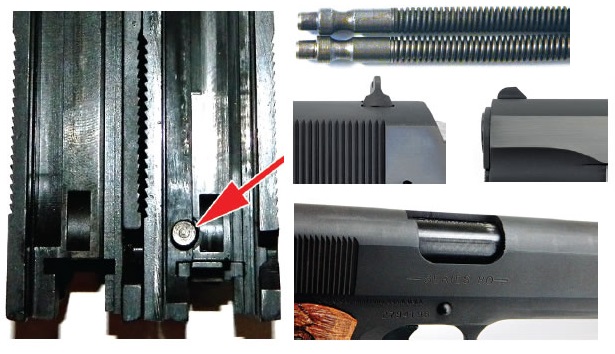 Also as a Series 80 gun, there was a trigger-actuated firing pin block (arrow pointing to it) and the revised hammer that had a half-cock shelf, rather than a half-cock hook as previous generations (like the Series 70) had. This was so the hammer would fall to half-cock if the shooter's thumb slipped while attempting to cock the pistol. The firing pins themselves received no change.

The Series 70 pin (top one) is the same as the Series 80 (bottom one). The front and rear sight were also made larger than what was found on the MK IV Series 80 guns. Lastly, a solid barrel bushing was used instead of the delicate Series 70 collet style barrel bushing. It also was cheaper for Colt to produce.

Field stripping is a breeze. If you've done one 1911 you can do them all. But since this is built more to the specs of a Mil-Spec USGI 1911, the tolerances are far looser. 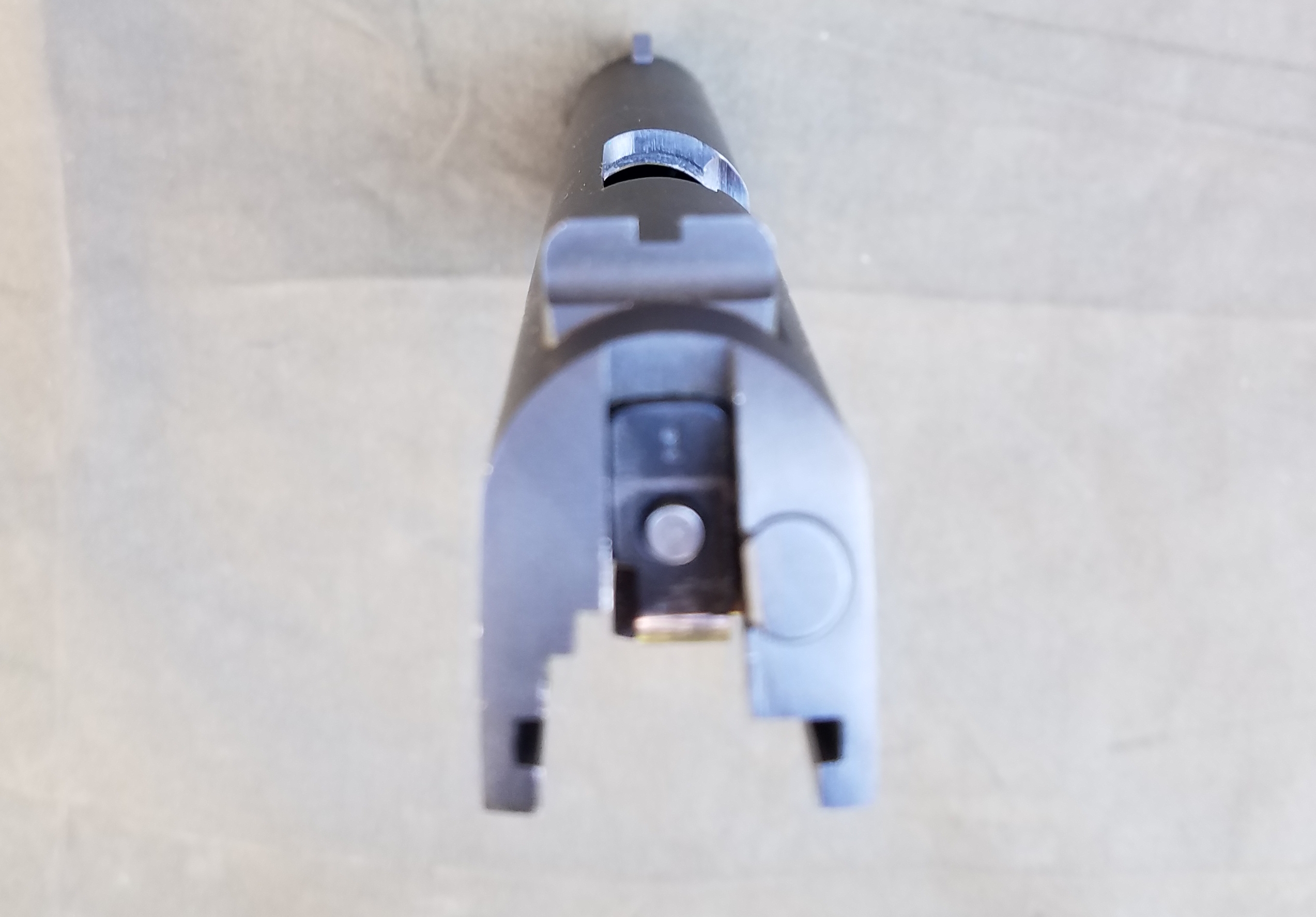 The sights like I said are a step above regular USGI sights but they aren't anything to write home about. But they do work and provide adequate sight picture. You can drift the rear sight for windage with a punch and hammer. As you can see in the photo below, I had to slightly move it to the left.

The machining is on par for a 1911 of this price range. Passable but not something that will win beauty contests. In today's market it equals what you'd see on a Rock Island Armory or one of the Turkish imports. But the frame is machined from a forging, not a casting like the current budget import level guns and it is made in America. 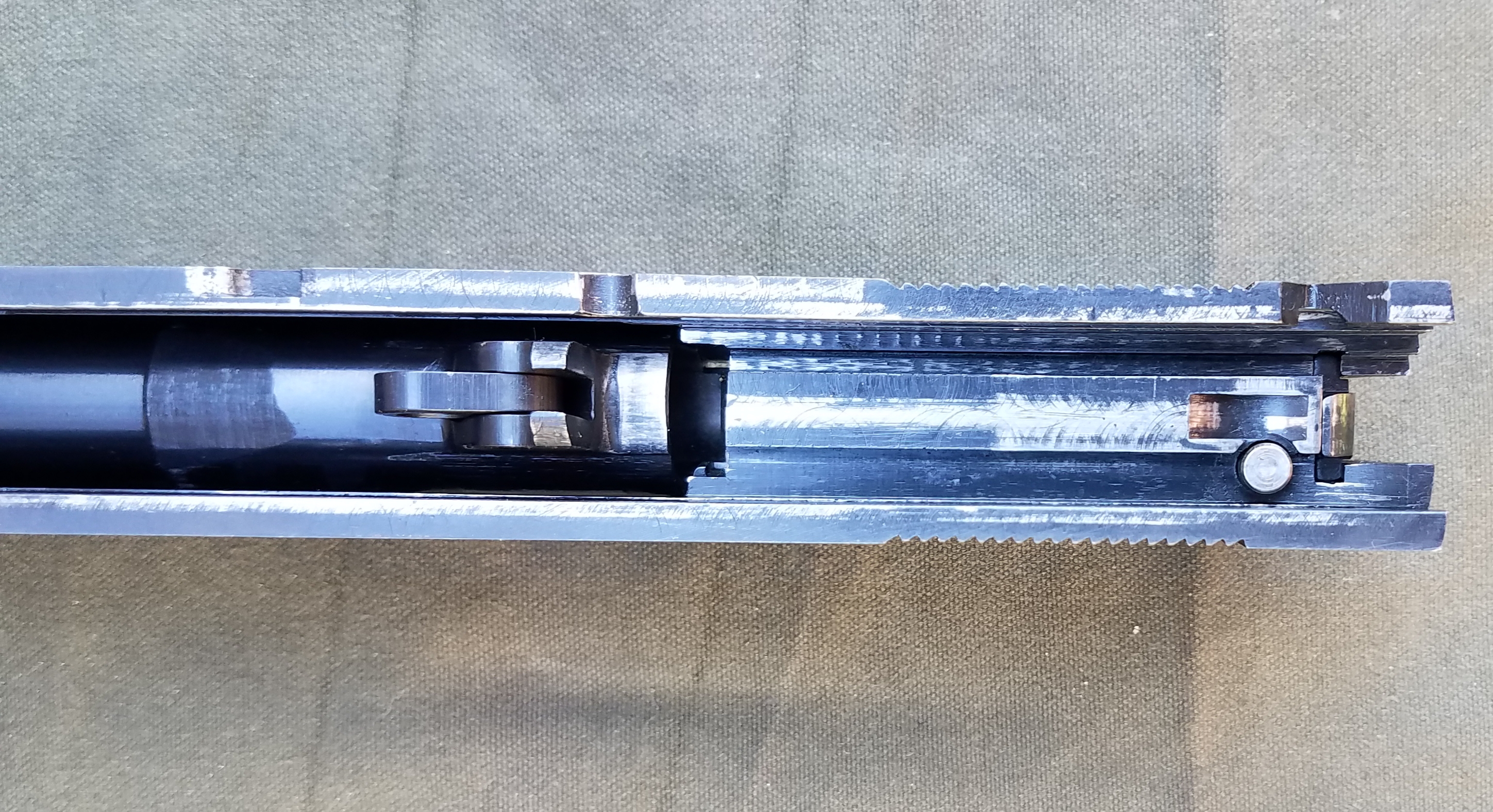 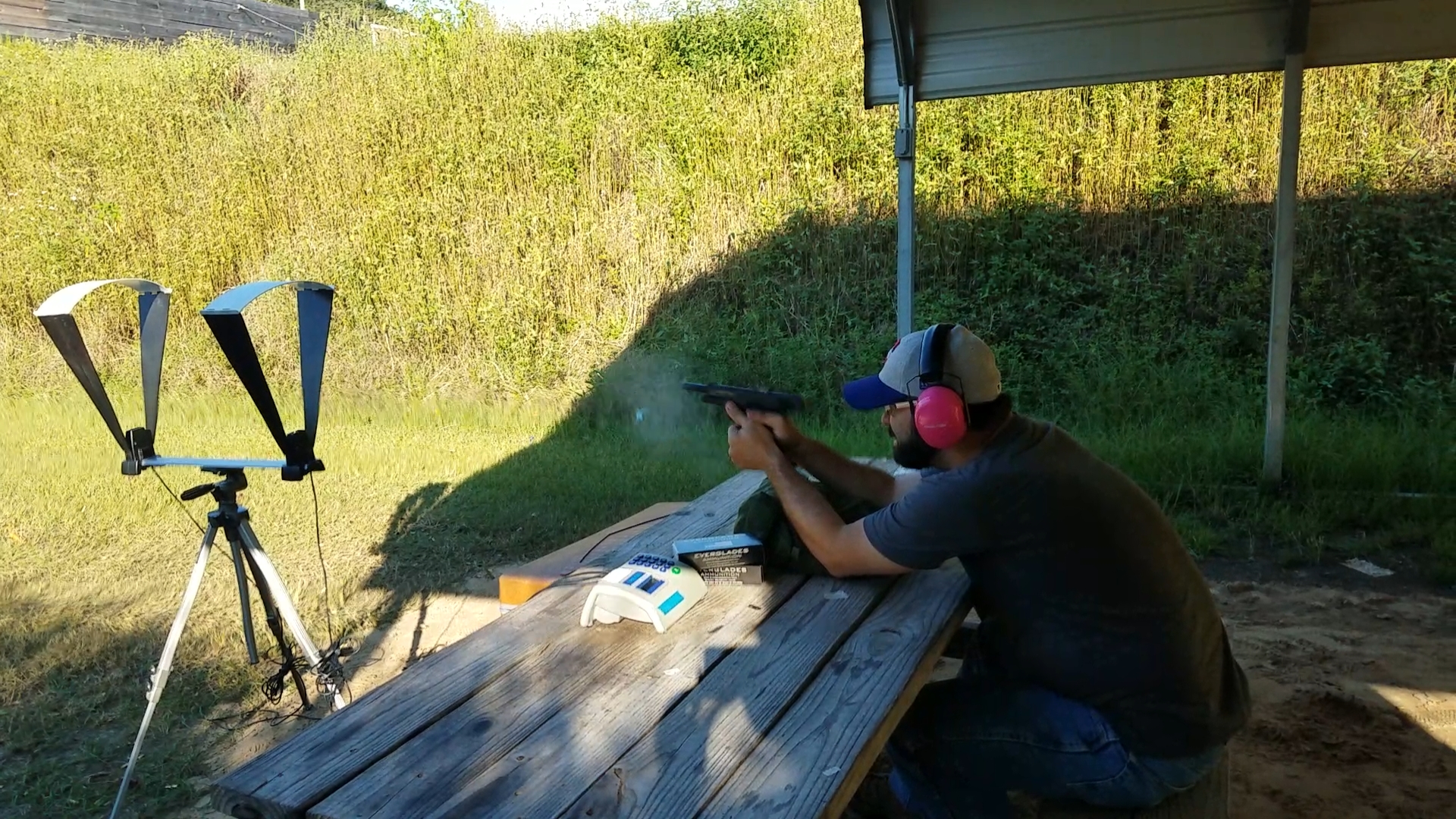 I was shooting Everglades brand ammunition. They're a local Florida company and do factory new and affordable quality reloaded ammo. I was trying to chronograph it but my batteries died. 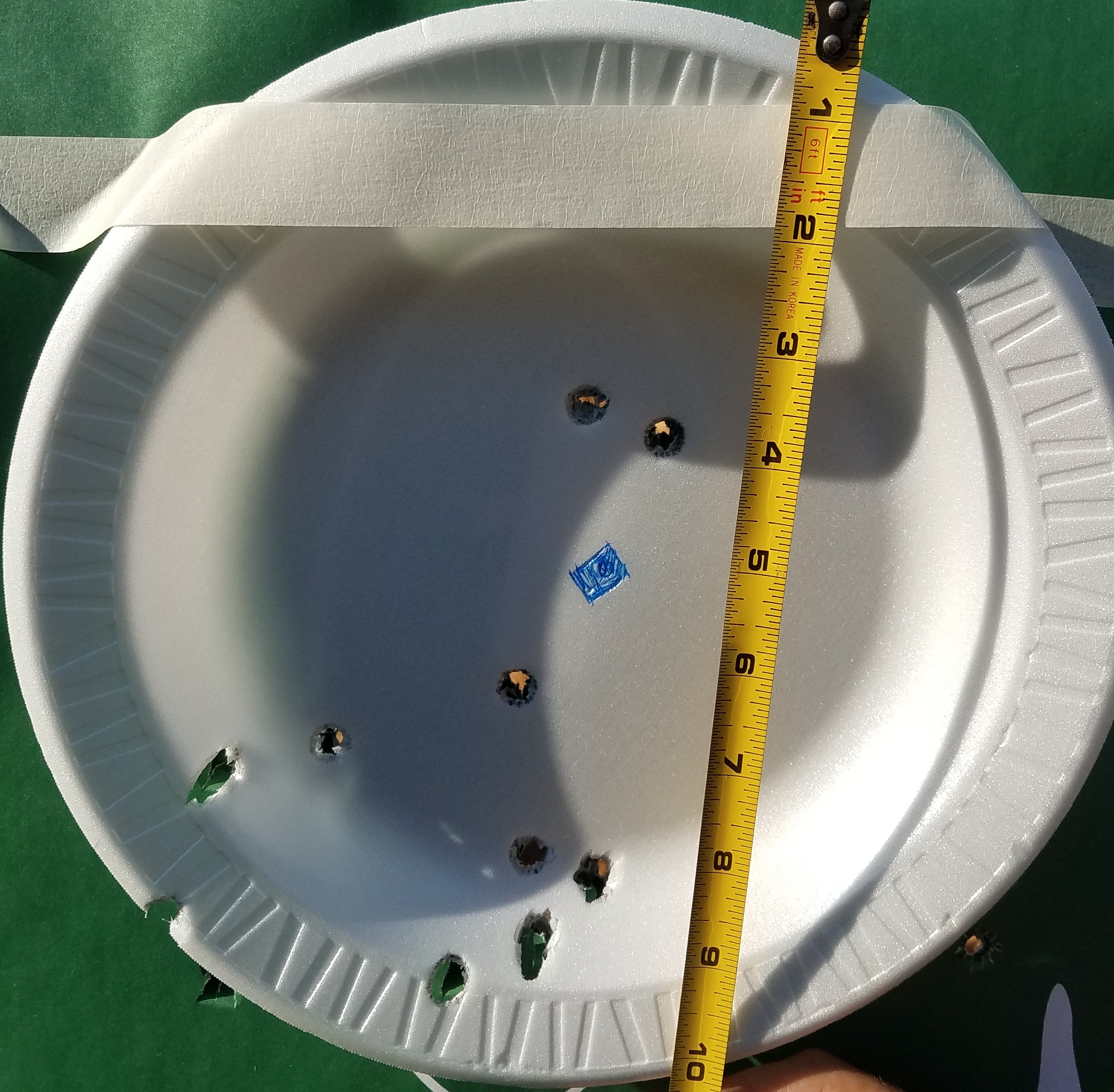 The 1991A1 shoots like what you'd expect. A USGI Mil-Spec. The trigger and accuracy is good enough for minute of bad guy.

In the end, the Colt 1991A1 Series 80 was to a degree the last of the affordable Colts. With the newer production guns, they've gone more into a status symbol than a working man's gun. Colt has left behind the idea of being the everyday person's gun and has cashed in on being a collector's status item. Something of quality and branding. Not toughness and handling. Yes, their current productions guns can be rode hard and put away wet. But they aren't marketed towards that anymore. The 1991A1 was and it is the last of that era.

Style and Appearance * * * *
Bad factory OEM grips. Brittle plastic and known for braking. This gun oozes the classic lines of a USGI 1911.

Customization * * *
The factory sights are good for the period. But to get them replaced you need some machining. As for the finish and anything else. It depends on your bank account. I swapped the mainspring housing for less than $20.

Reliability * * * * *
It is a beater grade 1911 from Colt right when they regained their talented staff. It works to the point of feeding spent shell casings.

Overall * * * *
The reliability is what you'd expect from a gun like this. IT WORKS. It is a good looking gun no frills 1911 that captures the spirit of the WWII USGI gun with better sights. The OEM grips were and are known to cracking. Hogue make the best cheap replacement grips anyways. This exact gun, while no longer made by Colt still lives on as the Series 80 Government Model with a better finish and higher price.