Browning Arms Company, a name synonymous with quality firearms for hunting, was founded in 1878 in Morgan County, Utah by the gun messiah himself, John Moses Browning. And while they haven't made many firearms targeted outside their core market of hunters and sport shooters, there have been a few exceptions like the BPS High Capacity shotgun. 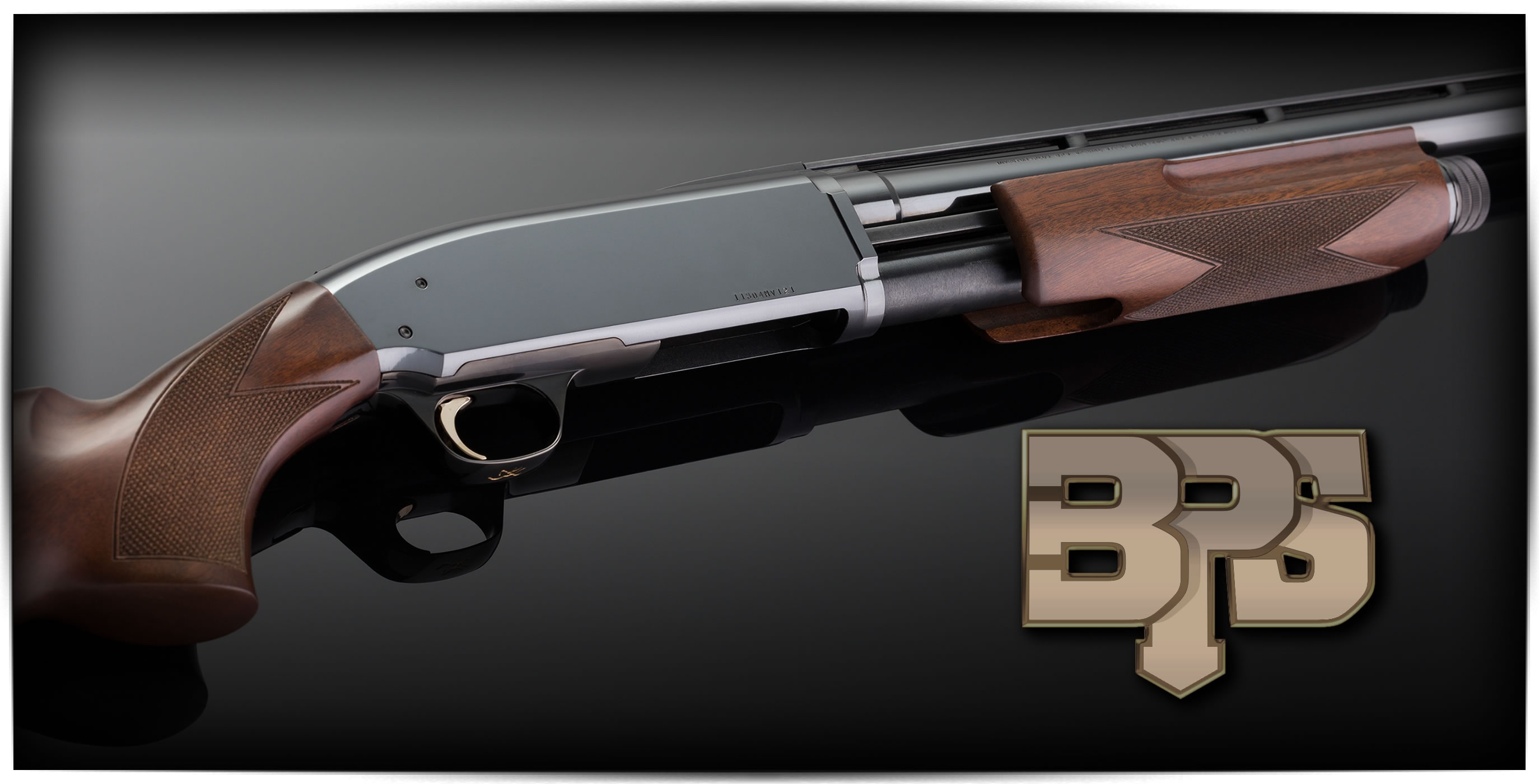 The Browning Pump Shotgun, commonly known as the BPS is a shotgun with a solid reputation for long-lasting durability and an uncanny ability to keep on working in spite of what Mother Nature does to stop it. This shotgun has rigid dual machined steel action bars, a forged and machined steel receiver, a convenient top-tang safety and bottom ejection for ambidextrous operation.

You read that right. The BPS ejects empties from the bottom for truly ambidextrous operation. Its lineage goes all the way back to John M. Browning himself with a tweak by John Pedersen (a man who even John Browning greatly admired).

"John M. Browning had the highest respect for Pedersen, and once told me that he considered him the greatest living arms designer, and probably the greatest of all time. I protested to Mr. Browning that he was overlooking himself, to which he replied that he was an old man, with all his work behind him, but that Pedersen, who had already accomplished so much, had his future ahead of him." Page 67 of the Book of the Garand by Julian S. Hatcher.

So where does the humble beginnings of this quality shotgun start? Back in 1913 in John Browning's workshop of course. Completed by 1915, Browning patented his design and sold it to Remington Arms. But due to the War to end all Wars going on in Europe, Remington didn't produce it until 1921. It was sold as the Remington Model 17.

With 73,000 made in 20 gauge, it had a good run and did fairly well. But it was soon to be outclassed by Winchester's world famous Model 12. Remington, undeterred, asked John Pedersen to rework the design into what ultimately became the Remington Model 31.

Produced from 1931 to 1949, the Model 31 saw 196,000 units produced in 12ga, 16ga, and 20ga. The Model 31 served with the FBI after the Kansas City Massacre. Each field office was issued one. During WWII, the Model 31 was produced as a riot gun and saw limited service across the globe. Despite being well received, sales still lagged far behind the Winchester. Remington went back to the drawing board again and designed the venerable Model 870.

But before that, another company took the Remington Model 17 and tried to modernize it. Following WWI the Ithaca Gun Company was searching for a pump-action shotgun to produce, primarily to compete with the hugely popular Winchester Model 12. They settled on waiting for the Remington Model 17 patents to expire.

After gearing up for production of what they planned would be the Ithaca Model 33, they discovered that John Pedersen had a patent that would not expire until 1937that patent being part of the Remington Model 31. So along with changing the introduction date (originally 1933), Ithaca changed the model designation from 33 to 37.

With production starting at the height of the Great Depression, things didn't look good. But then a dark cloud descended across Europe and the world was once again plunged into war. Ithaca, not wanting to be left out, produced the Model 37 for military service.

After the war, the Model 37 served in roles with the NYPD, LAPD, LA County Sheriff, and the US Military in Korea and Vietnam. The Model 37 has the longest production run for a pump-action shotgun in history, surpassing that of the Winchester Model 12 that had originally inspired Ithaca to produce their pump-action shotguns.

Which brings us to Browning. Browning made a number of shotguns, but the majority of them were either semi-autos like the Auto 5 or break-actions like the Citori or Superposed. But they saw the massive popularity of hunting shotguns like the Ithaca Model 37, the Winchester Model 1200/1300, the Remington 870, and the Mossberg 500 (which also traces it's lineage to the Remington 31).

Browning contracted with Miroku to design the best hunting pump gun, taking the best queues from the Ithaca Model 37 and Remington 31 and matching those with modern production methods.

The result was an instant commercial success. The BPS built off the solid design from the former works of John Browning and John Pedersen and became an instant classic for hunters world wide. 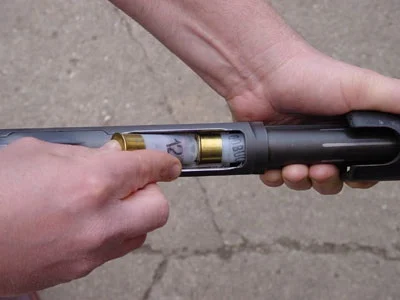 The biggest reason for its popularity was the fact that it is truly ambidextrous. The design is totally balanced, with matching dual steel slide action bars one on each side that balance forces for smooth racking. The top tang safety is functional for both righties and lefties. The receiver forms a "roof" over the actionthere's no opening on either side for an ejection port, so a drenching rain won't get into the action. Bottom ejection means there are no empties flying to the side, across your partner's line of sight.

Browning is owned by FN Herstal a big supplier to the military and law enforcement markets. And since those Ithaca Model 37s in service with the NYPD, LAPD, and LA County Sheriff's Department were getting long in the tooth, FN directed Browning to make a tactical model. And in 2007, Browning unveiled the BPS HIgh Capacity at SHOT Show in Orlando. 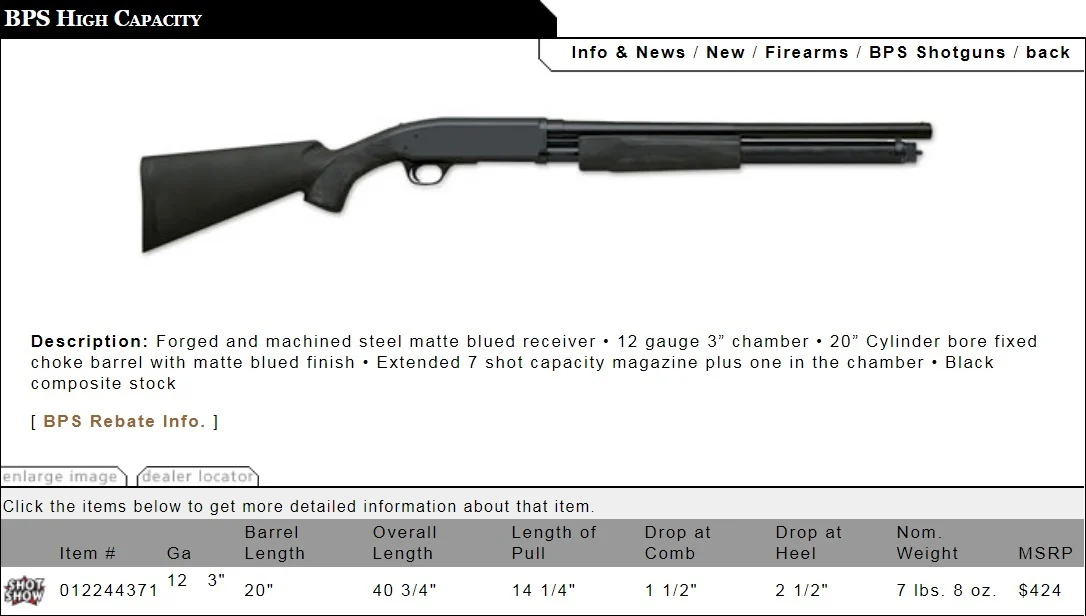 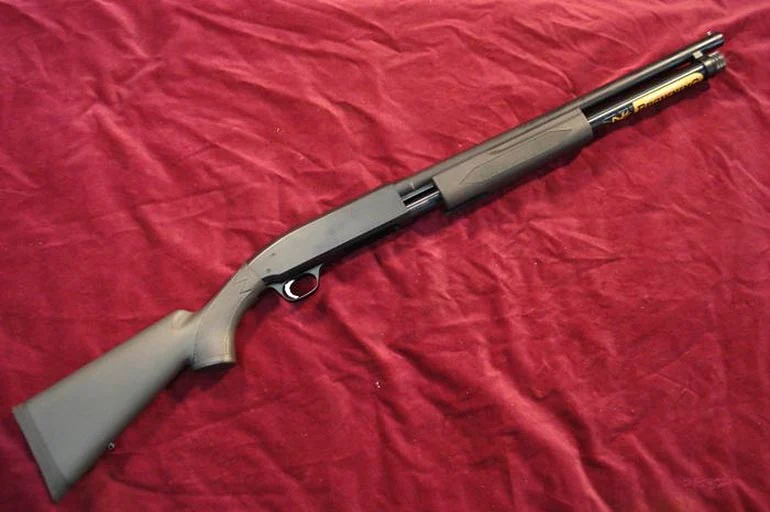 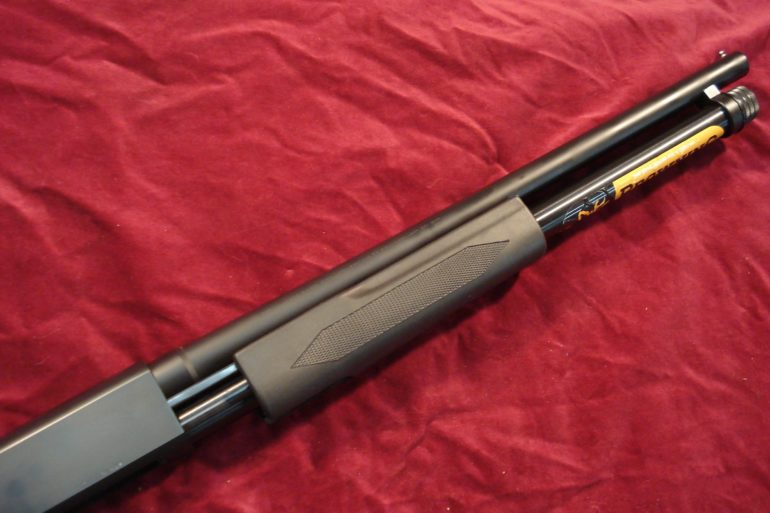 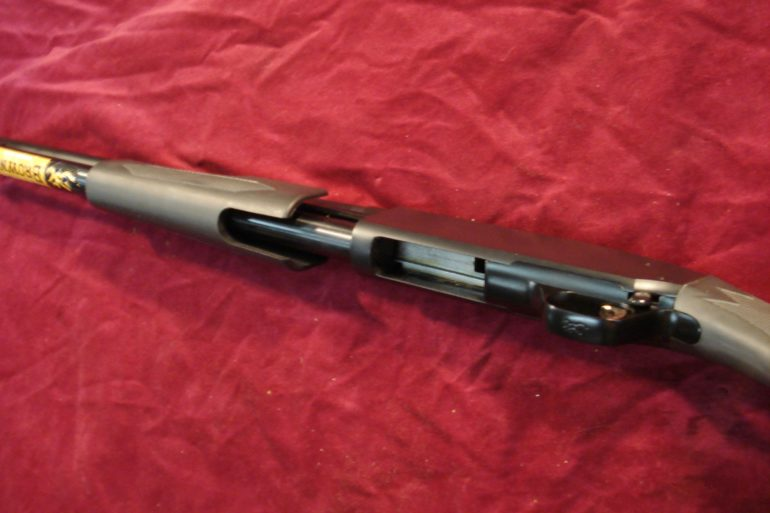 It was only offered in 2007 in order to gauge the market interest. But that was a beginning of a decline in interest in the tactical shotgun as a service weapon for law enforcement and home defense. The Clinton Assault Ban had ended in 2004 and the Global War on Terror was in full swing in Iraq and Afghanistan.

The AR-15 was gaining ground across the gun-buying community. The patrol rifle was replacing the shotgun in vehicle racks across the country and the same the went with for home defense shotguns, too. The idea of a 30-round, lightweight carbine just seemed to make more sense. Browning pulled the High Capacity model off the market in 2008 and it was never seen again. 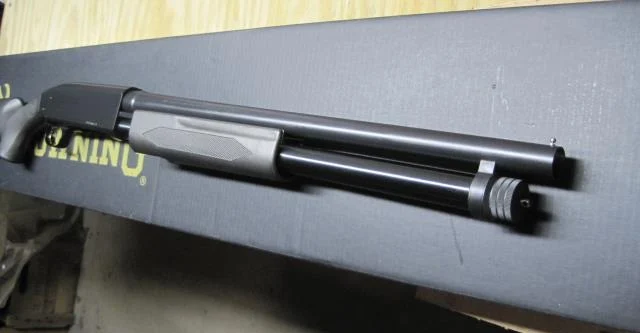 The BPS High Capacity didn't come with Browning's Invector Plus chokes. It was offered with a no-frills fixed cylinder bore barrel. The stock and handguard were simple black polymer and the sling mounts with sling mounts, one on the magazine tube cap and another at the bottom rear of the butt stock. 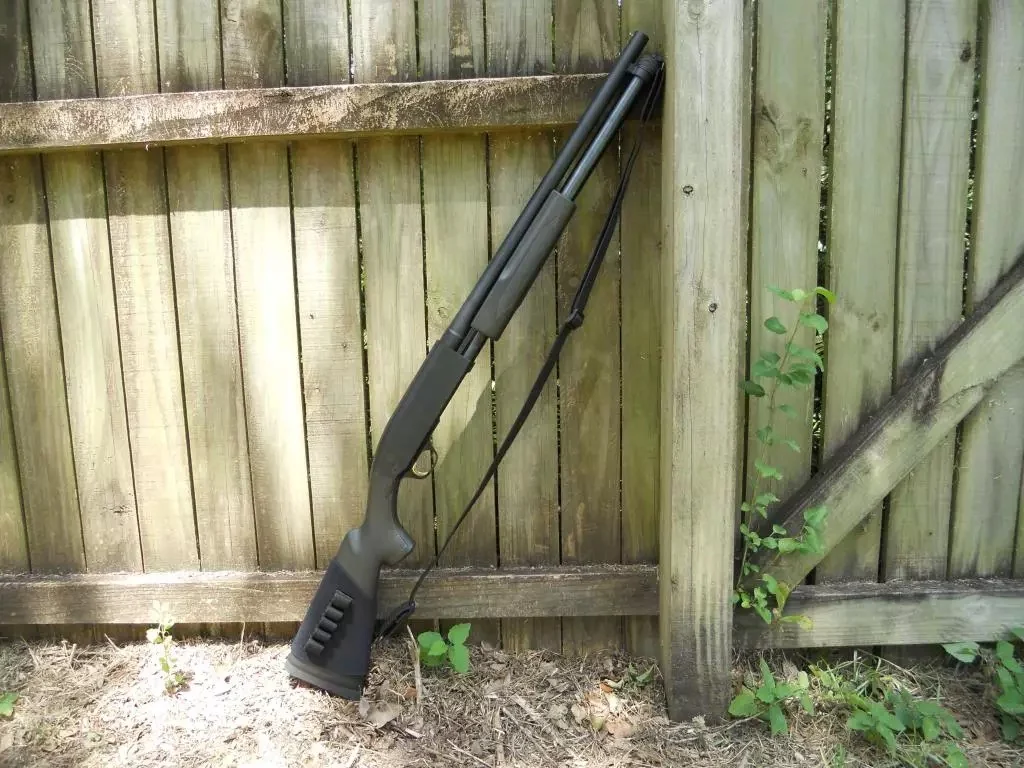 Accessories are non-existent. Only a generic aftermarket butt cuff works. But even though the BPS High Capacity was didn't sell well, it's all Browning and one smooth shotgun. The quality that went into mine excellent.

The pump is roller baring smooth, the trigger is crisp, and the tang-mounted safety is right where it should be. Being a bottom-feeder, you can't do tactical swap outs like you can with a Remington 870. But for a classic home defense loadout with nothing but 00 Buck, you don't need to. It puts any Mossberg 500 8-shot Security or no-frills Remington 870 Express to shame. 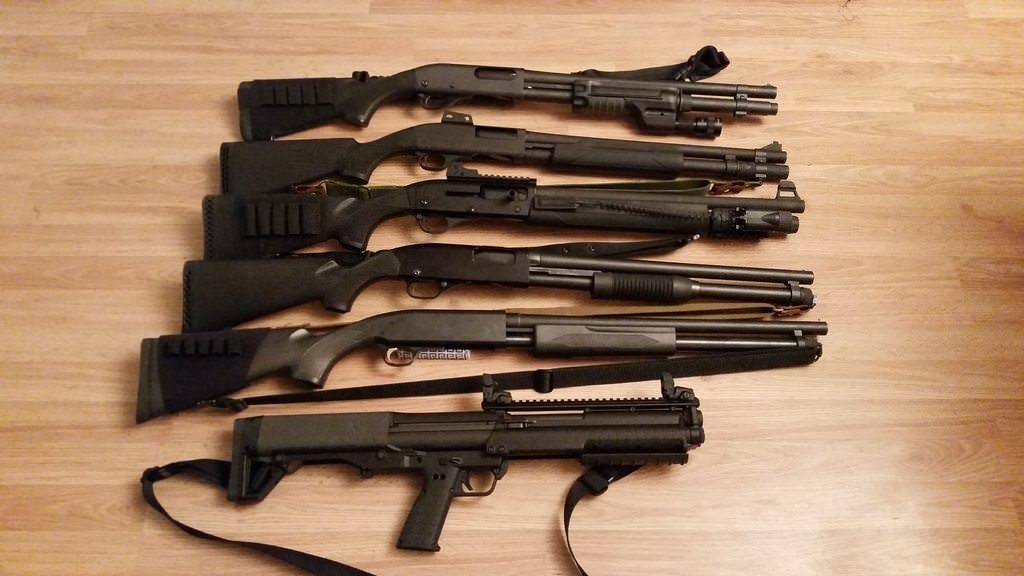 It gladly sits in my arsenal of fighting shotguns. And one of the best things is, it can use Aguila Mini-Shells without any modification. Yup, unlike Mossbergs which need that little adapter and Remingtons which won't work at all, the Browning eats them up with no problem just like my Kel-Tec KSG and Winchester 1300 Defender Speed Pump.

For those who have a soft spot for the BPS and want a modern tactical version. You can build your own. Browning still makes the BPS Stalker and Nordic Components makes extended magazines tubes. Or you can head on over to Midwest Gun Works and pick up a Browning BPS 20 Tactical Barrel Kit. But if you really want to trick out your BPS, get yourself the kit and send it over to Michiguns Ltd. They will machine an ejection port into the side of your BPS and make it a real tactical workhorse.

Yupa side feeding and bottom ejecting BPS so you can swap out loads. They also work on the BPS' cousin, the Ithaca Model 37.

The BPS High Capacity is the odd duck of the tactical shotgun world. It isn't some cheap Turkish or Chinese Knockoff of a proven design that's sold for pocket change on the clearance section of Buds' Gun Shop or at Walmart. It's an original quality product that was simply introduced into a market at the wrong time.

They're still out there and available and more importantly, very viable as a quality self defense shotgun. 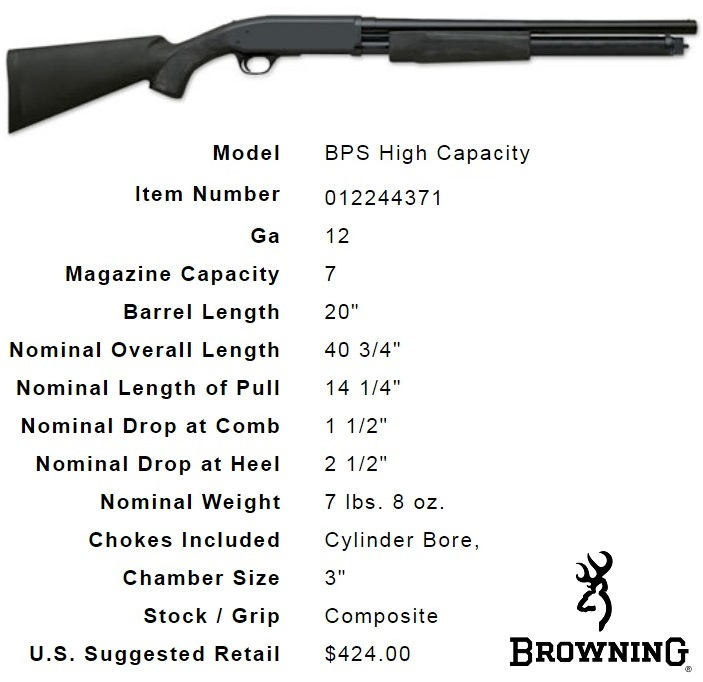 In the end, they are an interesting piece of Browning lore. One of the few times the company as lent its name to tactical products other than the Browning Pro Series pistol (which evolved to become the FNP and later FNX and FNS series) and the Browning BDM.

If you find one, snag it. You won't be disappointed.