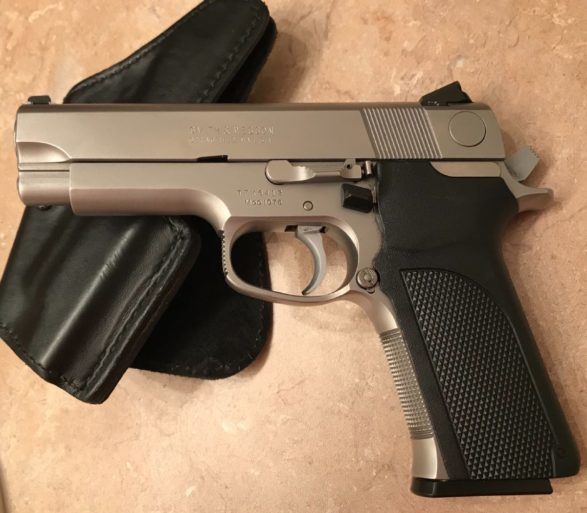 On April 11, 1986, eight FBI agents engaged in a rolling gunfight with two armed bank robbers. The bad guys shot and killed FBI Special Agents Jerry L. Dove and Benjamin P. Grogan. In the incident’s aftermath, the FBI concluded that a failure of equipment caused the debacle . . .

Smith & Wesson stepped up to the plate with their brand new tough-as-nails 100 percent stainless steel Third Generation Series semi-automatic. In coordination with Agent Hall, the S&W Model 1076 was born. The FBI signed a contract for 9000 pistols over a three year period. 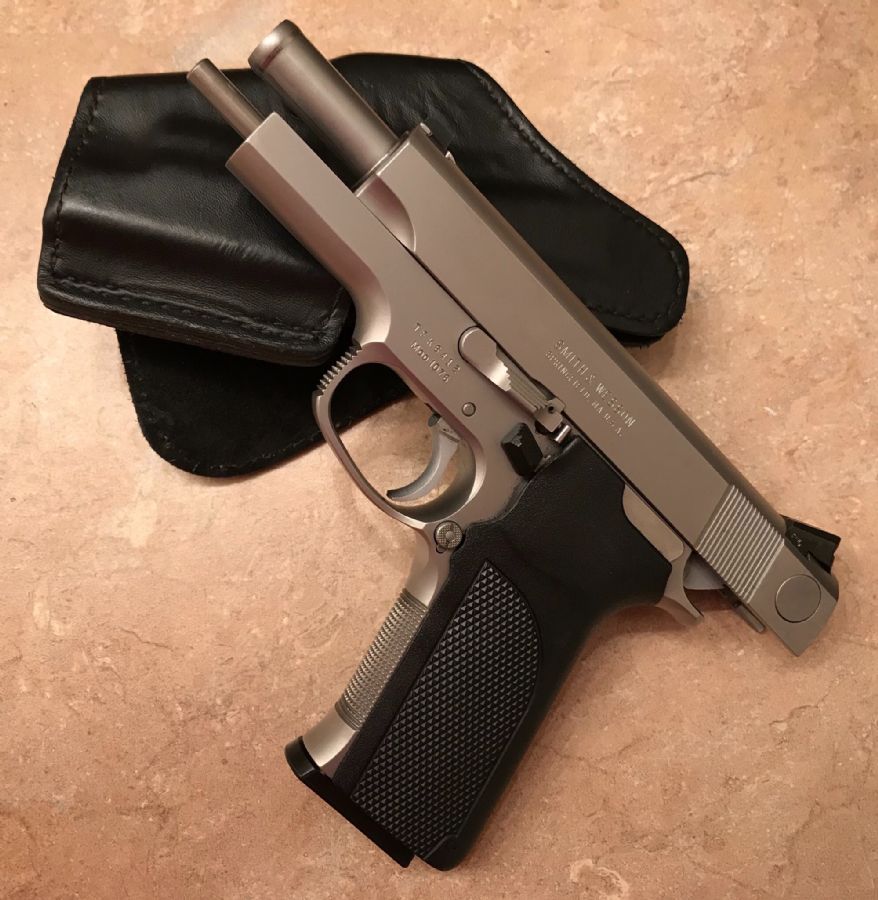 We’re talking about a nine-plus-one capacity, single stack, double/single action semi-automatic pistol chambered in 10mm Auto with a frame mounted decocker and no magazine disconnect. The 4.25″ barrel was stainless steel. It was topped off with a single piece wrap around Xenoy polymer stocks and Novak Combat three dot sights.

This 10mm Model 1076 was intended to be the be-all-end-all of police pistols. A dead nuts reliable handgun that was impervious to the weather, heavy enough that you could kill a man with it, unloaded.

The pistol’s take down was similar to the 1911 that somewhat inspired it. Pull the slide back until the take down notch aligns with the slide stop catch, push the pin out, move the slide forward until it is off the rails, remove the guide rod and recoil spring, and drop out the barrel. 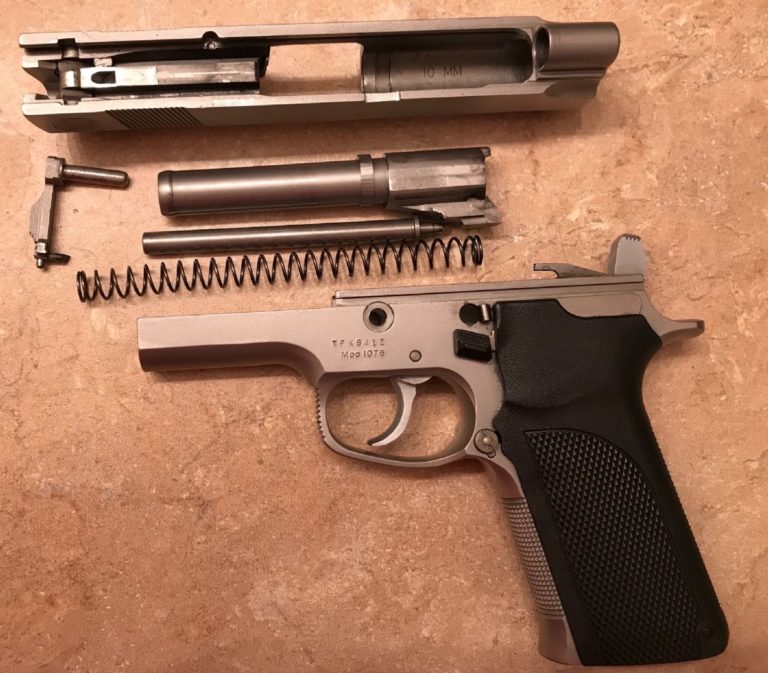 Recoil? We don’t need no stinking recoil. The Model 1076’s weight soaks up the energy that the 10mm Auto dispenses. The trigger is like every other Third Gen Smith: a smooth 12 lbs. trigger pull in double action with a deliciously short, sweet, and crisp single action pull of less than 3 lbs.

When the decocker is engaged, it resets the hammer to the half cock position. So the trigger pull isn’t as long as a traditional Third Gen Smith like a S&W 4566 TSW. 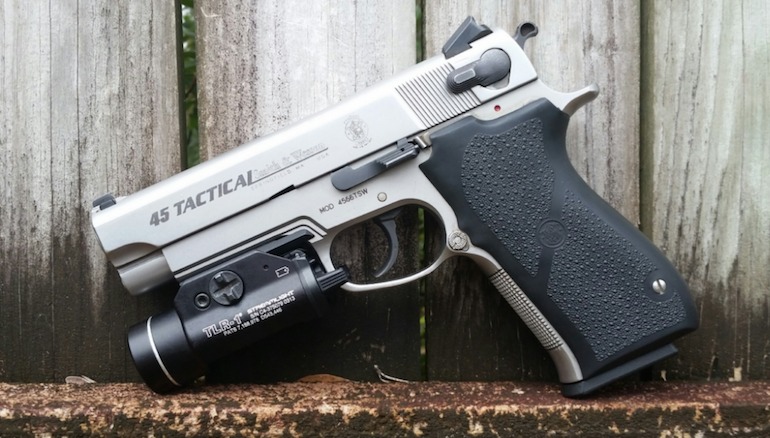 Part of the FBI Contract stipulated that the 1076 lacked a magazine disconnect so it could be fired without a magazine inserted — another shift away from the standard Third Gen layout.

The contract also called for a 15 round magazine.Yes, you read that right: a fifteen round, single stack 10mm Auto magazine for a full size stainless steel pistol. Think about that for a second . . . 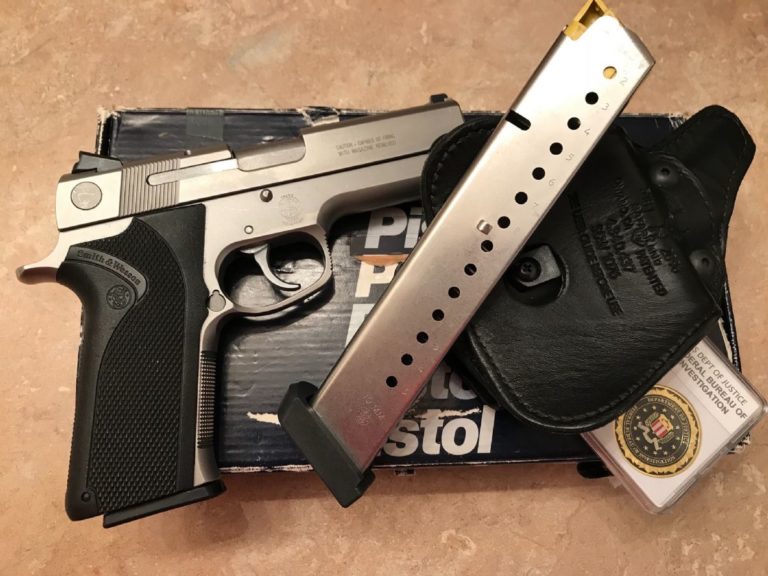 You’re a FBI Special Agent working a dope case in the dark gritty streets of Liberty City in Miami. It is 2am and you’re sitting in your unmarked car doing surveillance. You have your 1076 in your hip, two nine round mags on your belt, and a fifteen round mag in the map well on your driver’s side door.

Sounds exciting right? Where exactly do you stick that thing when you get out of your car? Back pocket? Ahhhh the mindset of the late 80s and early 90s. What a time it was. Anyways, back to the main topic on hand . . .

The S&W Model 1076 had a very short life span at the FBI: less than five years. The birth of the .40 S&W in January 17, 1990 sounded the death knell for the 1076. The FBI load for the 10mm: a Federal Federal Cartridge Company load of a 180 grain Sierra JHP bullet, delivering a muzzle velocity of 980 fps. The .40 S&W duplicated that “stopping power” on a 9mm framed pistol with greater capacity to boot.

Smith made precisely 13,805 Model 1076s. Only a handful of non-federal police agencies issued the gun (e.g., the Kentucky State Police). As the FBI doesn’t surplus their guns, actual FBI 1076s are a treasured item.

That said, legit FBI guns got into the wild via Smith & Wesson. The company purchased them from the FBI and sold them to distributors like Lew Horton Distributing Co. 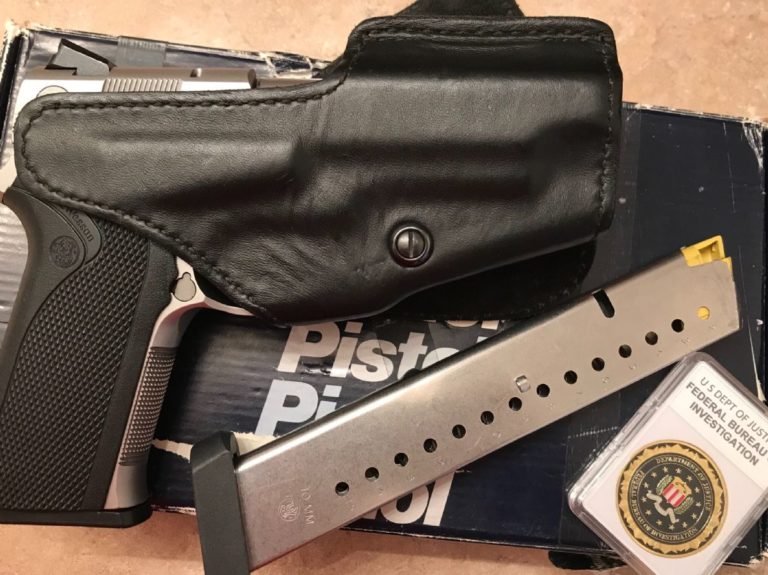 Used model 1076s aren’t cheap. The fifteen round magazines sell for over $100 a piece. Collectors will pay well over a grand for a Roy Jinks (S&W Company Historian) lettered 1076 with FBI provenance. Parts are hard to find, as are the original FBI Safariland Holsters. Worth it? For someone who knows the history and appreciates quality, yes. Of course.

[All photos of the Model 1076 belong to AR15.com member Mjohn3006 and are used with his permission.]